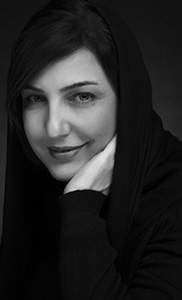 Simin Amirian is an Iranian contemporary dramatist. She holds a Ph.D. (Doctor of Philosophy) in drama, Cultural Center, in University Malaya UM. She is graduated from Cinema- Theatre University in the field of Dramatic Literature (MA), and Tehran University (BA) in Iran.

Simin has written more than 25 plays which most of them have staged, and several of her plays have also been translated into English. Simin is the lecturer in Art and Architecture University in Tehran.

She has started her artistic experiences in painting and sculpturing in 1986 and five years later (1991) started her work as animator and puppet maker in Iran National Television. After entering Tehran University, she wrote her first play (the Fable of Crow). Her other plays for kids including who’s clever? , The Parrot and Night-cap Papa , Golgis,Little Bibi and…published by Namayesh Publication, Madrese Publication, Dana and Ghatreh Publication and got staged in different parts of Iran. Along with kids scripts her adult plays were published and staged. Some of her works translated in English are: Mirtas, Amber, Parrs’cat and I, The Hidden shadow So, what do you want,…

As a director she started her work in 1990 and directed more than 16 plays.

On Puppet playwriting and its techniques she has written many articles and compiled Play writing for the Puppet theatre which is specifically on writing for puppet theatre. In 2000, four volumes of her translations of 20 puppet plays were published by Rabia publication. Another two translations of her are Puppet Tales Ghatreh Press /2004, “Storytelling Made Easy with puppets” / Ghatreh Press /2004.

Moreover, Simin travelled to different parts of the world like Poland, Armenia, Bulgaria, Indonesia, India, Malaysia, Thailand, Russia and America (USA) to participate in workshops, conferences and have performances.

Article:
2020  Magical years of thinking/
Research in the lyric poems of Shams Tabrizi

http://www.magiran.com/magtoc NO. 59 ISSN 1735-0239
Article in the seminar published in the book with the following link

2007 The Ant and the Grasshopper

1992 The pea and the Cold troll, Performed in Puppet Theater Center, of Theater and Puppet

Theater Production of Institute in Development of Children and Young

Adults, Tehran in1995/ published by Puppet Theater Center press in 1996

Published by Madreseh Press in 2000, Awarded as The best writer in 2000, Tehran